Zelda is one of the most well-known characters in the world, despite most people mistaking Link for Zelda, since he is the main character of all the adventures. A Zelda cosplay can be an excellent, elegant cosplay. Her princess attire can look good in social occasions, such as anime cons and formal ball dances. 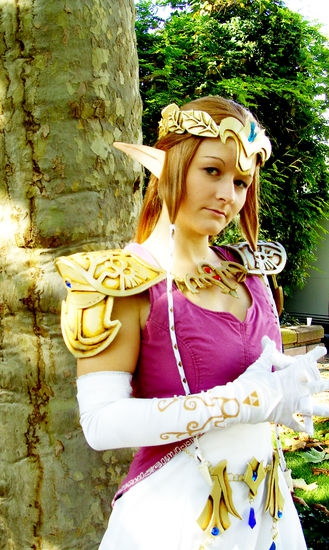 This awesome Zelda cosplay is an excellent example of how the setting in scenery can make or break a photo shoot. Imagine that Princesse Zelda in her castle in Hyrule. There would be lots of trees, greenery and nature surrounding her garden courtyard. It would be the perfect place to relax, sing, and get away from the day-to-day tasks of ruling the kingdom. You should remember that the scenery is going to be equally important to making you look good in your costume. This particular costume is really nicely detailed, the setting is good, and so overall it looks really cool.

There are lots of cool places where you can take pictures, and you don't have to wait until a convention to have your own photo shoot. Going to a con is a great way to find friends with cameras, or photographers who just love taking pictures of cosplay, and might be willing to do it for free even outside of the convention. If you know of a beautiful garden, Park, or other scene that would really fit your costume, talk to them about it and maybe they'll be just as enthusiastic as you are.

Of course outside looks great for Zelda, but if you know of any gray brick buildings, or other places that look like the inside of the castle, those are some other awesome places to do a photo shoot. Or perhaps you can take a picture inside a ranch looking house, or in sprawling meadows and fields – of course, when I think of Zelda I first think of Ocarina of Time.

What are the top zelda games of all time?

If you want to cosplay as Zelda, it's not a bad idea to familiarize yourself with various incarnations from the past several decades. Since the first game in the series launched for the Nintendo Entertainment System in 1986 the Legend of Zelda has been immersing gamers of all ages with it’s unique mix of exploration, puzzles and memorable items. Each Zelda title has evolved the franchise in some way, and since the main series now consists of over fifteen games, it’s not surprising that some entries have been better received than others. Whilst no Zelda game can be described as bad, this list will look at the cream of the crop; the top five games in the Zelda series.

5. Phantom Hourglass (2007)
The first Zelda game released for the Nintendo DS was a direct sequel to The Wind Waker, following the adventures of Link and Tetra as they travel across the newly flooded Hyrule. As the first DS Zelda game it is not surprising that Phantom Hourglass makes use of the console’s unique touch screen controls and - typically of a Zelda game - does so in innovative and creative ways. For the first time players didn’t control Link with the control pad, instead having to tap the touch screen wherever they wanted him to move to, and use the stylus to physically slash across the enemies he needed to attack. The touch controls also allowed Link’s trademark items to be used in new ways, such as physically drawing the desired path for his boomerang and bombchus. Mix these mechanics with a sprawling multi-level puzzle heavy dungeon that has to be visited multiple times throughout the game, and you have one of Zelda’s most unique titles to date.

4. A Link Between Worlds (2013)
If a good Zelda brings new elements to the series, a great Zelda game turns the entire series on it’s head. A Link Between Worldstakes place in the same world as 1991’s A Link to the Pastand grounding it a familiar setting was a very smart move on Nintendo’s part, as in many ways ALBW is the most unfamiliar game in the series. The development team actively set out to subvert and twist the series’ established tropes; traditionally, to complete a dungeon, players must find a key item in each level which they can then use to defeat the dungeon’s boss, but A Link Between Worldsrocked the Zelda fandom by allowing players a previously unknown level of autonomy; giving them the chance to complete the dungeons in almost any order. This meant the items had to be rented (and eventually purchased) from an NPC, so if the player had enough rupees they could be fully kitted out earlier than ever before. Despite being the most recent title released A Link Between Worlds deserves it’s place on this list as a breath of fresh, altering the series classic traditions in new and exciting ways.

3. Majora’s Mask (2000)
Without a doubt the weirdest game in the series, Majora’s Mask's story follows immediately on from Ocarina of Time. Link finds himself transported to Termina, a doomed world that is three days away from apocalypse. Although the game reuses a lot of Ocarina’s assets, it can definitely stand on it’s own two feet, with an immediately recognizable melancholic atmosphere. As if the fate of Termina wasn’t enough, Link has also been transformed into a Deku Scrub, one of three alternate forms he will eventually discover, each with their own distinct abilities and appearance activated by enchanted masks. Time plays a key role inMM, and given that a three day countdown is present at all times, it’s lucky that Link retains his Ocarina of Time, allowing him to travel back to the start of the three day cycle at will. Whilst Link will keep any items gained in each three day period, all other changes to the game world will be reset, meaning any help Link has given to the NPCs will be forgotten by all by the player. Perhaps it is this which gives the game a dark and tragic tone which will stay with you long after it’s completion. This game is also extremely fun, as it gives you a rare opportunity to get a better insight into more of the races that live in the Zelda world.

2. The Wind Waker (2002)
If Majora’s Mask is great for leading the series down a dark and “mature” path, then Wind Wakeris even better for doing the exact opposite. Controversial as soon as it was announced due to it’s so called “kiddy” cell-shaded graphical style,Wind Waker’s beauty and sharp gameplay shut down it’s detractors the second they got their hands on it. It’s impossible not to fall in love with this game; the art style - like Disney meets Studio Ghibli - is flawless, with Link (despite being silent as ever) being more articulate than ever before thanks to his enormously expressive eyes. Wind Wakersaw Hyrule flooded with water, meaning Link had to use a boat, rather than foot or horseback, to travel between the games various locales, and although the lengthy sailing sections (which were greatly improved in the Wii U remake) were criticised by some, this is the largest Hyrule we’ve ever seen. The size of the world helped contribute to a Zelda which feels hugely epic in scope, and thanks to it’s distinctive art style, this may be the only Zelda to feel genuinely timeless.

1. Ocarina of Time (1998)
Well what else did you think it was going to be? Ocarina of Time is the definitive Zelda game, it drew on the series 2D history, and presented players with a fully realised three dimensional Hyrule for the first time, and what a sight it was. Moments such as exploring Hyrule Field or becoming Adult Link for the first time (not to mention completing the Water Temple) have become veritable rights of passage for gamers to complete and It’s very telling that the remake for 3DS was almost entirely made up of aesthetic changes, the gameplay is just that good. This game is not just the best Zelda game ever made, it’s simply one of the finest games full stop.

Be the Zelda you want!