Cosplaying as Pikachu can be super cute. There are millions of fans of the Pokemon series from across the world, and Pikachu is one of the cutest characters ever. Therefore, doing a Pikachu Cosplay can be fun and exciting. Apart from being the first pokemon most young people were ever familiar with, Pikachu has so many iconic features that it's easy to modify a costume to fit your type and style.

To the right are a couple of great pictures of people in Pikachu cosplay costumes. These people have got the right idea, by customizing the costume to their style. This pokemon's ears and tail and cute cheeks make it iconic, no matter the shape. 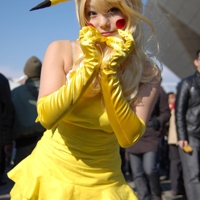 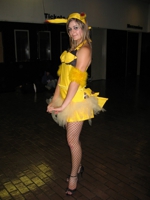 The characters of Pokemon are very popular with cosplayers. You can be a trainer, a monster, or even Professor Oak. Part of this popularity comes from Pokemon's overall popularity and wide reaching audience.

There are Pokemon television shows, stuffed animals, actions figures, and even video games. While there are many video games not all of them are entertaining and will keep children happy. There are 10 Pokemon video games that stand out to most people.
These are 10 of the most popular games on the market so far, and with new releases this list may change or grow. These games have provided hours of entertainment to millions of people around the world. Bringing the characters into the world of cosplay is a natural progression.